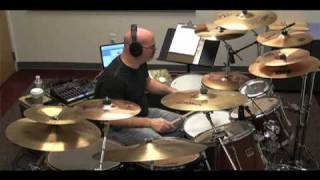 With Darin’s twin brother and older sister being multi-instrumentalists, Darin grew up playing piano, drums, and saxophone. Hearing Jethro Tull’s Thick as a Brick ignited his passion for the genre of progressive rock music. Darin played in progressive rock cover bands from junior high school into his mid-20’s, then transitioned into writing and performing original music with his own band for many years. Darin’s two passions for music and technology led him to create a series of YouTube videos, which feature him playing drum tracks to many progressive rock classics.  “And that was before my lessons with Chad Wackerman!” says Darin. When Downing Grey needed a new drummer, that’s how Darin was found – on YouTube. Downing Grey is a perfect fit for his talents.