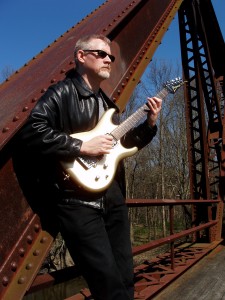 Like many guitarists, Bill struggled for years with lessons from instructors, but was always frustrated. Taking matters into his own hands, he developed his own ear-training abilities to that of a formally-trained musician. As a result, when “Jukebox” learns a song, not only can he play the guitar parts from memory, but also the keyboard and bass parts!
Playing in numerous cover/original bands throughout high school and art college was great training for Bill. Majoring in graphic design, and illustration, resulted in a career as the art director for a high-profile publication. Regardless, Bill always continued to perform as a musician.

Bill is incredibly meticulous about achieving the “soul” as well as the techniques to really capture the challenges of progressive rock music, note-for-note. Bill has been influenced by many distinctly unique guitarists, but Steve Howe, Pat Metheny, David Gilmour, and Jimmy Page are some of the most important references to his phrasing, improvisational, and compositional styles.
A founding member of Downing Grey, Bill is very excited to perform live. Don’t be surprised when it “sounds just like the record.”